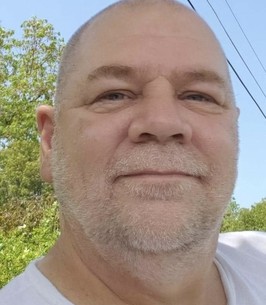 Robert (Bob) Simonton age 55, of DeMotte, passed away on Thursday, March 3rd, 2022, at the Franciscan Health Crown Point Hospital. He was born in Gary, IN. on April, 21, 1966 to Ross and Eleanor Simonton, and as a man he was a devoted and loving father, son, brother, uncle and friend.

Bob served in the United States Army as a paratrooper during Desert Storm, and a radio wire installer following his overseas tour. After being awarded many medals and acknowledgements, he was honorably discharged from the service. After the military, he became a machinist and one of the best mechanics in industry. He enjoyed gardening, yard work, and tinkering with machines and antiques. He also volunteered for his local fire department. After many years as a machinist in the steel mills, Bob became a small business owner, working as a mechanic and overall handy-man in order to provide in home care for his disabled son, A.J. to whom he devoted the majority of his time.

Bob was also a loving family man who fostered and took in children who needed love and a family. In later years, he routinely spent Sunday afternoons on the phone with one or the other of his grown children. Bob always loved Christmas and Disney and and loved seeing his children and grandchildren for the holidays and visits any time. When they were small, he enjoyed entertaining his children, nieces and nephews, and, later, grand children, helping them to host tea parties, put up tents for camping in the yard and a pool for swimming, making s’mores with them over the campfire, and telling campfire and bedtime stories from his days growing up. He was a joy to little children, was Bob, because he loved the wonder in their eyes and the sound of their laughter and play.

Bob is survived by his siblings; Brenda (Steven) Kopka, Rossann Hammond, Angela (Mitchell) Leneave, Austin Long, and Elijah Long. He was preceded in death by his father Ross Simonton and his mother Eleanor Long. He is also survived by his loving children, Samantha (David) Fee, Christopher Robert Simonton and his partner Kaylin Jennings , Jasmine Simonton, William Simonton and A.J. Simonton. He was blessed with many nieces and nephews, including Matthew Kopka, named after his beloved uncle, and celebrated the addition of grandchildren to his family tree; Keegan Fee, Arianna Fee and Lilian Simonton. Robert loved and cherished his family more than anything.

He had a strong faith in God throughout his life and found a church home and family for himself and A.J.as a member of the Immanuel Reform Christian Church in Demotte, IN. He loved his family home that belonged to this mother and father, and treasured continuing to live there with A.J.

An incredibly funny, friendly and honest man, Bob was also patient and kind, a good father and a good friend. He was the kindest soul one would ever meet and protector of all that he loved. Bob will be truly missed by his family and friends, though they continue to feel his presence in their life and in their hearts, forever.

Visitation will be held on Monday, March 14th, 2022, from 9-11am CST at the Immanuel Reform Church located at 9991 W. 1200 N., Demotte, IN 46310. The memorial service will begin at 11am, with a luncheon following, where there will be time for family and friends to share their memories with other's.

Frazier Funeral Home and Cremation Services in DeMotte have been entrusted with the arrangements.